If ever inspiration was needed this is it.

This will be a quick post this morning as I have a day full of visitors. Andrea and the boys are due shortly and my parents are coming in the early afternoon. Then later this afternoon a couple of the great people I referred to in my post about working relationships are calling in on their way to the Leicester Tigers game round the corner.

But this morning the words will flow easily following a chat with the guy in the next bed to me last night. It has made me feel more inspired than ever to get on and ensure my goal of climbing Snowdon and raise as much money as is humanly possible to be spent on research into finding new treatments and hopefully cures for the conditions he, me and the others are suffering from.

We were laid watching Sky Sports on our respective ipad and laptops and got talking about sport initially. I was watching the Leeds Rhinos game and he was flicking between that and a football game. Once we got chatting though I was transfixed with it and lost track of the game for a spell.

I won't mention his name for the sake of privacy but he's only a couple of years older than me and like me he is involved in construction working on large projects. He has a form of Lymphoma that is even rarer than my Leukaemia, and I think he said there are only 4 cases a year compared to my 200.

He's been receiving treatment for about 3 months and has gone through radiotherapy and almost continuous chemotherapy which has really taken itself out on his body and left him very poorly. It's not helped that he's also picked up an internal infection and his only sustenance is the drips that he's on continuously. He can't keep any food or fluids down and is generally having a very miserable time of it at the moment. He's having a really tough time, poor bugger, and my heart goes out to him and his wife who's here regularly.

What really got me was when he told me that the stage of treatment he is at is effectively the last chance saloon and that despite his chances having increased from 30% survival, they were still no better than 50/50. I got an email from my sister later asking how I was and when I mentioned my bed door neighbour in my reply I had to wipe away the tears so that I could see the screen.

He's a really decent bloke and it just goes to show that these kinds of diseases are so random and indiscriminate. I wouldn't wish anything like this on anyone but why do they always seem to hit the nicest people. I truly hope he makes it through this and have wished him all the best and hope he gets through this successfully. It's taken my mind off my own illness which I still feel I have been unbelievably lucky that I have so far been unaffected by anything that has been done to me.

I'm off any treatment now until Monday I think, other than the steroids so have a couple of days rest.

I've just discovered that my plan to wind up the Leicester Tigers fans has been thwarted by the fact that there is a solar film on the windows which is mirrored on the outside. Just my luck that all we could see when me and the boys went out to the car park to check is mirrored glass! Not to worry, we've turned the flag round and as the photo below shows it just about fills the window inside. I'll leave it up and unveil it when Paul and Tracy arrive this afternoon before the Tigers game. 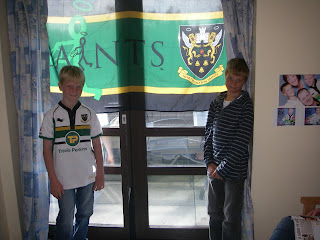 That's it for today I think so I'll sign off and see you all tomorrow.

Thanks again for reading.
Posted by Dieseldrinker at 11:55