Here I am back in Leicester but today just as an outpatient. I was up early so made my way to the hospital so that I can hopefully get my treatment over and done with and back home for lunchtime, fingers crossed. So far I've had my blood samples taken and a cannula fitted so they can bring the Ambizone as soon as they like and get cracking as far as I'm concerned.

You would have thought being back at home in my own bed I would be sleeping well and possibly better than I did in hospital, but unfortunately over the past couple of nights that hasn't been the case.

On Monday night I went to bed about 10 and woke at 12.30 and didn't get back to sleep again before Andrea and I got up to check on Max at about 6am.

Last night I was feeling tired and went to bed about 11.30, thinking a late night would help me sleep. Unfortunately I woke up again about 3.30 and laid awake for a couple of hours, managing to drop off again for a while later and finally getting up at 7am.

The strange thing is despite the lack of sleep I don't feel tired though I guess I'll have a snooze this afternoon when I get back home.

Whilst I've been in hospital I've been having a sleeping tablet each night to help me sleep, and it seems to have been working. I've had some good rest whilst I was in the ward. After Monday night I went to the Doctors yesterday and asked for a repeat prescription of the tablets the hospital had been prescribing and awaited the decision. The Doctor called me late in the afternoon and ran through the reservations he had about prescribing the particular type of tablet, largely because I can become dependant on them.

I assured him that rather than taking them every night I will alternate, so hopefully I will get some good nights sleep. Perhaps when things settle back into a routine I'll have less on my mind and less to think about when I wake up, which seems to be the problem. I'm waking up and thinking about all sorts of silly, unnecessary things which distract my mind and stop me going to sleep.

I'll collect the prescription later and maybe try a tablet tonight to see whether it helps.

Following my post about mischievous Max yesterday he was as good as gold last night. Once again he was given the free run of downstairs (we have a stair gate to prevent him coming upstairs) and once again he made himself comfortable on the sofa to sleep curled up on the remaining cushions.

The only peep I heard out of him was just after 5am and when I went downstairs to check on him he'd knocked the cushions off both sofa's and was curled up on two of them on the floor. I put the cushions back in position again and he made himself comfortable, had a tummy tickle and settled down again.

I think we've cured him and the misdemeanour with the cushion yesterday could have been down to his frustration at the cushions falling off the sofa and him not being able to get comfortable, as there was no chewing last night.

As the photo below testifies, he likes being comfortable and cuddled and this was this mornings reward for being a good dog last night. 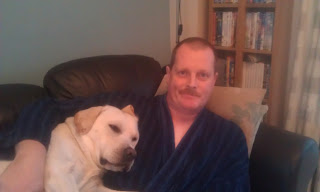 It looks like things are moving to get my Ambizone started and things are quiet in the clinic here so hopefully I'll be over and done with by lunchtime and on my way home again.

See you all soon and thanks as always for reading.
Posted by Dieseldrinker at 09:51