A busy day ahead.

I'll keep the blog brief today as yesterdays was a bit of a marathon but well worth writing. I also have a busy day ahead starting first with the bit I'm looking forward to, which is the weekly visit from Andrea and the boys. They've hopefully got things planned to do with me and I'll rope them in to help write a bit for the blog too.

The bit later comes with an element of trepidation. I have another dose of Rituximab which is the drug they took about 5 hours to deliver last week. This week though having had no reaction to it, they can deliver it faster and hopefully shorten to a couple of hours.

But then as my drugs are causing Anaemia I need to have a transfusion of a couple of units of blood this afternoon. I've never had a transfusion before but it's one of those things you have to sign a consent form for having heard all the blurb about the risks. I know and understand that in this day and age the controls and screening that go into the processing of blood will minimise the risk of any problems, but it still has to be at the back of your mind. Despite all of the precautions there are still risks of contracting Hepatitis, HIV, CJD amongst the big ones, together with minor issues of picking up a virus or infection carried in the blood which can make me poorly very quickly in my immuno-suppressed state.

When weighed up though I have to have the treatment and it will restore some of the energy and hopefully colour I have lost. I know they will be monitoring my blood pressure, pulse, sats, and temperature and will be able to tell quickly if there is a problem so I am reassured by that.

Like everything else they've done to me I know it's in my best interest and I will not refuse their advice at any point.

I got another card yesterday from my Great Aunt's daughter, together with an email later from her to correct my relationship to Auntie Kathleen. Strictly speaking as she correctly points out she is my first cousin once removed but being a bit of a mouthful I hope she won't mind me abbreviating it to the Auntie Kathleen I've always know her as.

The boys and Andrea have arrived now so we'll see what the boys have to to say? As the photo below shows the boys are helping me write the blog. 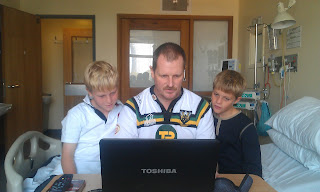 Tom (right) played his first game of football last Sunday for the Grange Park Under 11's and scored two goals from his position on the left wing. Good on him! His first was a close range shot and the second was from just outside the 18 yard box. He also won a penalty with his amateur dramatics which one of his team mates converted and set up another goal by putting a cross into the box which one of his team mates put away in the back of the goal. Well played Tom!

Sam (left) had his second two hour training session of the new Rugby Union season at Towcestrians on Sunday too. They started with some fitness training followed by tackling practice and ended with a match of Rugby League which Sam enjoyed as he's spent the summer playing for the local League club, Northampton Knights. Afterwards he rounded the session off in the bar with a celebratory Lucozade, bag of sweets from the tuck shop and a burger. Takes after his dad!

At school they are in different classes but doing the same subjects, which is Micro-Organisms in Science (appropriate under my circumstances), Ancient Greece in History and have both joined the choir to exercise their 'angelic' voices ready for the Young Voices concert in the Birmingham LG Arena in early December.

My transfusion started whilst they were here but we got plenty of things done together this morning so we had a great morning and it was good to see the boys and Andrea today and have some quality time with them all.

The transfusion of the first unit of blood has finished without incident after 2 1/2 hours and I'm waiting for the Rituximab, which is the antibody chemotherapy drug that took 5 hours to run last week. Having had no reaction before they can run it quicker this time but it will still take about 2 hours. My cannula is leaking slightly and they can't afford to let chemo drugs leak onto the skin so they'll be fitting a new cannula beforehand. Hopefully I can swap hands over again as alternating hands gives them a rest to recover for a couple of days.

I'm not sure whether they're doing the second unit of blood today or whether they'll leave that till tomorrow but I'm feeling more comfortable about the process now that I've had the first. Andrea said the colour was coming back to my cheeks as the first lot went in so hopefully it's working.

So apart from having to spend most of the day hooked up to a drip the day is going well and some of the anxiety has gone away. I'm feeling happy now - must have been some good blood!

Thanks again for reading.
Posted by Dieseldrinker at 15:22