I'm a bit late today as I've had a lazy day at home. Mind you I managed to wash the car this morning though it made me a bit breathless due to my red blood cell count being low at the moment. My white cell count is currently within the normal range so my risk of infection is low, which is why I guess they let me come home.

Today I'll tell you more about the member of the family that has had a couple of mentions already, our Labrador Max. I promised to detail his slow cooker/chili escapade that he got up to the other night and forgot all about it, so today I'll spill the beans.

But first a quick update on the plan for my treatment over the next few days.

As promised I was allowed to come home yesterday and despite trying to disguise a trip to the hospital as a surprise treat for me from Andrea and the boys, Tom saw straight though the plan and worked out immediately that I was coming home again. He's a smart cookie that kid!

So after a couple of treatments in the afternoon which had me on the drip for the best part of three and a half hours, the boys and Andrea arrived towards the end and after polishing off my tea I was free to leave. We got home just after 8 o'clock last night and were greeted by one very excited dog.

I have three days remaining to complete the first phase of the treatment and have to attend the hospital on Wednesday, Friday and Sunday to get the last doses of the anti-fungal and chemotherapy treatments. Wednesday will be done on the day clinic as an outpatient so I can drive myself to Leicester and back for the day. But because the day clinic is closed over the weekend it means that when I report on Friday I'll be admitted to the ward for the weekend to receive my treatment on Sunday. This does mean I'll be in hospital again over the weekend but all being well I should be able to come home again on Sunday evening.

After that I'll be due another Bone Marrow biopsy to see how the treatment is working and dependant on that the timing of the next phase of treatment (which is a repeat of that I've just had) will be decided. Hopefully I'll get a short break to allow me to celebrate my birthday at home on the 10th October.

Anyway, back to the subject of todays blog, man's best friend - in my case Max.

Max is our yellow Labrador and he's about 17 months old now. He's a stunning looking dog as the photo below on his first birthday shows, and he comes from a breeder with true champion credentials, having had several dog show champions (including the famous Crufts). Max's own father was best of breed a couple of years ago and still continues to win shows. 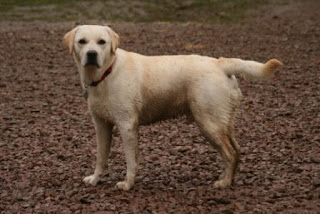 It is said that dogs have a sixth sense and can detect when something is not right. Max's behaviour since my illness started and certainly since I've been in hospital seems to back this up and my absence has left him very unsettled as my blog has often mentioned.

I guess at 17 months old, he's the equivalent in  dog years of a grumpy teenager, but thankfully he's getting over his mischievous child stage. In his younger days he's been quite destructive. The house and some of the furniture carries the battle scars from his exploits. At one time he had a taste for the plaster on the walls and we've had patches of wall chewed out in the living room, hallway and kitchen. He's eaten dishcloths and tea towels and Andrea's silicone oven glove has also been destroyed. One of the kitchen cupboards has also had the Max treatment and the kitchen chairs (legs and seats) and the kitchen table legs have also had a good chew as you can see below. 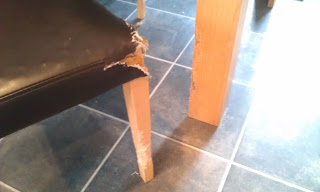 Normally on a night Max gets the run of the hallway and the kitchen and mooches about overnight between his bed which we used to put in the hallway and his carpeted crate. But during his unsettled period whilst I've been in hospital he's had some restless nights and has destroyed his bed and chewed big holes in his carpet.

Last night we thought we'd show him some trust and extended his free area to the living room. Making sure that everything that might be a temptation to chew was out of harms reach we left him overnight to make himself comfortable on the sofas, which he duly did. I woke up about 12.30 and came downstairs to check up on him and found him curled up on one of the sofas as happy as Larry.

I didn't get back to sleep all night for thinking about silly things (must take a sleeping tablet tonight!) and so Andrea and me were up at 6am to see what Max had been up to. He'd had a minor misdemeanour and had chewed one of the older cushions, so the inner lining was ripped open and some stuffing was one the floor. Hopefully he discovered it wasn't to his taste and won't bother again. But the upshot is that I think we've found the way for him to be settled overnight which might just ease the burden on poor Andrea having to get up to him at all hours as he destroys his carpet.

But that's not before he destroyed the slow cooker whilst Bernoie was here last week. Andrea had made a chilli one night last week in the slow cooker and when dinner was finished there was a little bit left. So the slow cooker got pushed to the very back of the kitchen worktop and theoretically out of harms reach overnight. But that wasn't banking on Max's size and apparent reach as part way through the night the smell of chili must have been too much and somehow he managed to reach the slow cooker and pull it down to the floor.

It must have fallen with a real clatter but remarkeably nobody woke up at the sound, so in the morning Andrea came down to the kitchen to discover the glass lid smashed in pieces, the inner bowl licked clean and the outer casing kicking around the floor. So the dog had a chili midnight snack and we no longer have a slow cooker.

But other than his little misheivous acts, which will hopefully stop now I'm home, he's the truest faithful friend that a dog can be and an integral part of the family. As I write he's laid on the sofa alongside me chewing his bone as comfortable as can be.

Thanks as always for reading.
Posted by Dieseldrinker at 16:57