I decided that whilst I was sat here today without much to do I might as well get the ball rolling on the fund raising front so I've spent part of the day creating a JustGiving page. More about that below.

I slipped up last night and felt tired when I went to bed so I didn't bother with a sleeping tablet at bedtime. That was a mistake and once again, as I had at home, I woke about 3am and couldn't back get to sleep. Largely the reason was silly things spinning around in my mind. I won't make the same mistake again tonight and will make sure I have a tablet. Thankfully I've managed to catch a short doze this afternoon and hopefully caught up a bit of sleep.

I had visitors this morning in the form of my parents, my sister and one of my nieces, Ellie.

Suzanne, my sister, went for the blood test yesterday that is required to see if she is a match to be a Bone Marrow donor, and bore the bruises to show it. I know she was being sarcastic when she said the Vampires had been after her for her blood, but looking at her arm it looked like she had been attacked and bitten!

Ah well I'm worth it I'm sure.

With such a crowd we thought it best to head out of the ward and went to the main hospital restaurant for a drink, snack and a quick catch up. As always it was good to see them all and it's the first time I've seen Suzanne since this all started.

I was just in the process of setting up the beginnings of my JustGiving page when they arrived so now is the time to expand on that.

As I've said in my previous blogs, I have been inspired to do something positive and raise some money for the charity Leukaemia and Lymphoma Research, which is the only UK charity solely dedicated to research into blood cancers, including Leukaemia, Lymphoma and Myeloma. It is therefore of particular relevance to me and my fellow patients here in hospital. Anyone can get a blood cancer at any age. Around 30,000 people, from babies to grandparents, are diagnosed with blood cancer every year in the UK.

The charities web site contains some fantastic information and has been of real use to me in finding out more about my condition. They also have some high profile fundraisers such as Ian Botham, who's done his various walks to support them, and the 'Pedal for Petrov' campaign currently has a high profile as Aston Villa player Stiliyan Petrov fights his own battle against Leukaemia.

But despite this, huge amounts of money are required to fund valuable research each year and the charity indicates that it needs around £20million each year to maintain the life saving research the charity funds.

If I can raise anything towards that I feel it's something I have to do to give something back to the medical teams that have cared for me, the researchers and scientists that have developed the treatments that are hopefully curing me, and to the patients who in many cases suffer considerably more than me. I feel fortunate enough to have maintained my otherwise relatively normal health through the first phase of my treatment whilst I've seen others who have fared less well and have had a considerably rougher road to travel along.

I've said before that my main fund raising aim is to conclude my 'Road to Recovery' by making the climb up Snowdon in North Wales and that is still my goal. I am in the process of planning for this to happen during the summer of 2013 when the weather will hopefully be agreeable and my fitness will be restored adequately to make the climb. 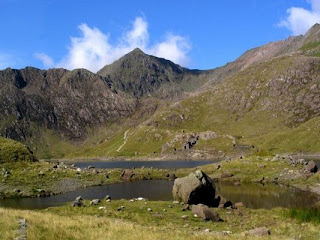 Already I've had volunteers from all quarters of family, friends and colleagues and hope that the walk can attract large numbers of people, all individually sponsored or as part of my 'team' to maximise the funds we can raise. Anyone that wants to tag along is more than welcome and as plans develop I will convey them through this blog.

But summer 2013 is a long way off and by creating a JustGiving page now I can allow people to start making donations. Through this blog and other media I can hopefully spread the word and raise some money ahead of the climb up Snowdon and have set myself a large but hopefully attainable overall goal of £10,000. With the sponsorship I hope to gain for the climb I hope I can smash that target and raise much more but let's see how things go.

So the fund raising growth hopefully starts here and will climb steadily to a crescendo when the time of the climb approaches and the event itself takes me to, and hopefully far in excess of my goal.

So my plea to all reading is therefore to please start to spread the word amongst family and friends and urge people that if they are willing to donate to please do so, great or small, for the sake of people like me and my fellow patients. Every penny counts and by using JustGiving as as UK taxpayer the Government has to release Gift Aid from it's claws which means the charity gets a bit more than your donation alone.

So the address if you are able and wish to donate is justgiving.com/dieseldrinkersnowdon.

To make things even easier, you can also donate £5 just by sending a text from your mobile phone. Simply text RTOR66 to 70070.

Please help me make a difference and I thank you from my heart in advance.
Posted by Dieseldrinker at 18:38