It's Thursday in case you hadn't noticed, and whilst it's just another day for most of you, it brings me my next dose of chemotheraphy and I'm back on the steroids. Hopefully this time will be just as uneventful as the last and there'll be no adverse reaction. My strength is better than ever, I'm maintaining my weight and am feeling fit and determined.

That's the boring stuff out of the way!

I've mentioned my book a couple of times in my blogs so today I thought I'd give you some detail on the subject matter which is my families dubious history and their involvement at the head of a gang of criminals that dominated a portion of Yorkshire some 240 years ago.

In the mid 1760's the area around Halifax was renowned for the woollen and worsted trade and many of the locals supplemented their meagre livings as farmers by weaving cloth which they then sold at Halifax. The cloth was very high quality and the type of stuff used in military uniforms amongst other things. But when the Seven Years War finished in 1763, the demand for the cloth dropped and the industry in the area fell into decline. Families struggled on the reduced income that had previously come from their flourishing industry. 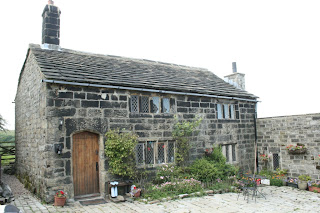 The eldest son David, who I am directly descended from, had been apprenticed to an ironworker in Birmingham and returned to his family home around the mid 1760's to continue his trade and help support his own new family. He had 3 children in 1766 (David), 1767 (Mary) and it is through his youngest son Isaac born in 1769 that the line continues to me.

There is evidence that shows that David not only brought his ironworkers skills back to his homeland, and whilst in Birmingham also learned the illegal practices of clipping coins and coining new ones. He quickly found support in the neighbouring farms and slowly a gang of clippers and coiners grew up in the area. In recognition of his stature at the head of the gang, David became known as 'King David' and his brother Isaac, the 'Duke of York' and William, the 'Duke of Edinburgh'.

Hence my reference to Royal blood in my line, albeit it is not genuinely blue!

The process the Hartleys and their gang members used was to clip the edges off a good sized gold coin, file a new edge onto the old coin and return it to circulation. The clippings and filings were collected and enough gold was obtained from about 7 coins to enable the gold to be melted down and a new coin sized blank cast. The Coiners would then use a pair of dies to stamp the impression of a head and tail onto the blank and it too would be returned to circulation for a large profit.

Because Spanish and Portuguese coins were in circulation alongside the English Guinea, and because their geometric shapes were easier to copy, the new coins were usually Portuguese Moidores. This also had the advantage that the Moidore carried a higher face value (27shillings) than Guineas (21 shillings) so the profit was even greater, especially as the Coiners only used about 22 shillings of gold to make the new coin.

So the Coiners gang turned a healthy profit and for some time carried on undisturbed. They gained the support of the locals as anyone who lent the Coiners a good coin for clipping would not only get their coin back, but would also receive a small payment, or a share of the clippings in return. So everybody made a bit of money, not just the Coiners, and it allowed the gang to prosper and grow.

Whilst most ordinary people saw no harm in making a little extra money on the back of the Coiners activities, the process was of course quite illegal and in fact carried the death penalty for Treason. In 1768 and 1769 the prevelance of clipped and counterfeit coins in the area drew the attention of the newspapers which increasingly reported the type of fake coins in circulation.

It also drew the attention in particular of the local Inspector of Excise, William Dighton, who began a pursuit of the Coiners gang that would result in a number of arrests including ultimately King David Hartley. But that final arrest would also have dire consequences for Dighton, more of which I'll describe in another blog.

So the subject of my book is the Yorkshire Coiners, led by my ancestors, and includes research I have carried out over the last 4 years. I have visited the National Archives in Kew, Halifax Archives, Sheffield Archives and Leeds Central Library to locate, review, and transcribe the original documents relating to the whole gang, not just my ancestors. This has enabled me to compile a complete chronology of the Coiners, who eventually numbered over 100. Those pursuing them to justice ultimately included a former prime minister and correspondence I have reviewed showed that the case was discussed at the top levels in government and even involved King George III himself. 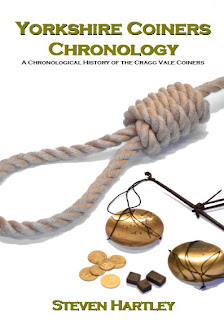 The working title of the book is the 'Yorkshire Coiners Chronology' and having proof read it during my stay I hope to complete editing over the coming weeks and explore the possibility of having it published through a friend.

Thanks again for reading.

Steve
Posted by Dieseldrinker at 13:02