Hi everyone. I have a couple of good mates visting today so looking forward to a bit of company. Not that I'm bored anyway as the mornings are full of catching up with the bundles of emails and messages from the fantastic well wishers out there and I seem to keep well occupied.

So today I thought I'd clear up any concerns over the 'Dieseldrinker' and its origins. It's not something sinister and I'm not a closet consumer of syphoned fuel!

I've always had a love of off road motorsport and I guess I always preferred muddy vehicles, so watching rallying took precedence over F1 and motorcross over tarmac circuit racing. My interest in off road vehicles also extended to the 4x4 variety, and I've always been a fan of Land Rover.

My first car when I turned 17 was in fact a Land Rover Series 2a, built the same year as me (1966) which I co-owned with my mum. It was an experience learing to drive in that with a crash gearbox and first and second gears and very heavy steering. But being an offroader I was able to get in some individual practice on a private estate whilst my dad went rough shooting, leaving me to drive alone around the tracks left from the old army camp that had been there during the war.

The extra practice I got in stood me in good stead and I passed my driving test first time in a conventional car thanks to the local driving school.

For a cheap vehicle at the time it was great fun and despite being petrol powered and not that economical I can distinctly remember filling it up once a week with five quids worth of petrol (at a pump where somebody actually served you) and it would last almost a full week. Oh if only that were the case these days.

A series of 'normal' cars succeeded my beloved Land Rover and it wasn't until later in life that the 4x4 bug was in my system again.

As a consequence of redundancy from a job about 8 years ago I managed to secure for what turned out to be a very short time, a contract position in London which meant a daily commute by train from Northampton. In effect then I just needed a cheap runabout, that was cheap to insure and ideally that I could maintain myself and possibly tinker with on a weekend.

I turned to the trusty Green Oval again and bought myself a 1986 Land Rover 90 in Battleship Grey with a sluggish 2.5 litre naturally aspirated (non-turbo) engine!

It was a bit tatty but was good enough for me and gave me a project as well as a runabout. When I secured the job I now have only a couple of weeks later which came with the benefit of a company car and fuel card, the Land Rover was still kept as a toy and provided many weekends of tinkering, tarting up, and days of green laning with the boys sat in the back in their forward facing seats. I eventually gave the Landy a home respray which I was immensely proud of and at the end I was so sad to see it sold which was just after the photo below was taken. 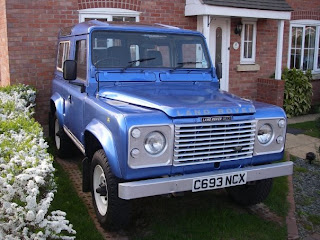 But to help with any queries I had whilst I was tinkering I joined some of the online forums, most notably 'Difflock.com' where I became a regular poster. So in doing so I had to come up with a 'handle' and as the old Landy was a bit on the thirsty side and ran on diesel, my handle became 'Dieseldrinker', which has stuck ever since.

So there you have it, mystery solved - the origins of Dieseldrinker!

I'm still a Landy nut inside though and my ambition when my health is up to it and funds will allow is a new project. I fancy either restoring a Series 1, or creating a modern take on the Lightweight, with an LPG converted V8, fancy paint job, disk brake conversion, truck cab, etc, etc. My Mrs is probably reading this anyway so I won't go into the full details for the sake of her shattering my dreams!

Quick update on the treatment. Yesterday was quiet with nothing out of the ordinary and I've had an IV dose of Ambisone today for an hour which is some sort of anti-fungal drug. Other than that my mate Phil has been and we've put the world to rights so I have an afternoons TV viewing planned before the onslaught of my other mate Billy tonight.

All the best everyone and thanks for reading.
Posted by Dieseldrinker at 13:59