It's the thing most people associate with Cancer and Chemotheraphy and apparently it's inevitable.

Now I'm not a vain person. My fashion sense is non existent and as far as hair styles are concerned I prefer something practical, having had a clippered haircut for many years which does me fine.

So hairloss is not something that I expect to bother me and will probably just deal with it in the same spirit I'm tackling the rest of this. A baseball cap or woolly hat to keep my head warm should suffice.

But I thought I'd experiment a little and see where hair loss starts and to what extent.

I've had a moustache for probably the best part of 24 years and it's possibly what most people recognise me for. With the exception of a couple of times when I've been adventurous enough to shave it off to remind myself what my top lip looks like it's been a permanent fixture. In fact my wife insists on me keeping it as she thinks I have an ugly top lip!

Otherwise being fair haired I can get away with shaving every couple of days as the stubble isn't so noticeable when it comes back. I'll admit to leaving shaving a little longer between recently which has been due to working on a construction site environment where I did notice there was a prevelance of designer stubble, so generally have been shaving once a week.

But as part of my experiment I've decided to stop shaving completely and see what happens. The old razor blades can graze the skin anyway and any cuts and grazes just give another route into my body for infection so I thought why run the risk. That's my excuse and I'm sticking to it!

So I took a quick shot of me this morning as a reference of how I look now and show this below. 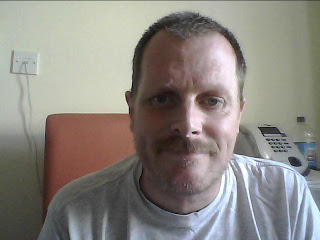 As far as I can tell no hair loss has started yet, though there have been a couple of loose hairs on my pillow this morning. That's probably not unusual anyway and I put it down to old age.

So on with the experiment.

As far as the treatment is concerned I have a couple of rest days now. I've been on steroids since the start but get a break from them till Thursday. That's good as they have a tendancy to give you a bit of acid which has been painful over the past couple of days. They're giving me something to counteract it and I have plenty of Gaviscon and the pain is much less today so hopefully we can avoid it coming back. My next dose of chemotherapy is on Thursday so until then I'm going to make the most of not being on a drip or taking loads of tablets.

See you all soon and thanks for reading.

Steve
Posted by Dieseldrinker at 12:32