Today is a good day!

Yesterdays elation at being let home for good behaviour turned out to be a long drawn out affair and I'll tell more of that in due course, but not long after I announced me temporary reprieve from hospital in various forms came another surprise.

I got a phone call from my sister-in-law Lisa, letting me know that she and Andrea's brother Paul were on a secret mercy mission from Leeds called 'Operation Yum Yum' and that as she spoke they were on the M1 dashing to Leicester with a basket full of goodies from my nephew Freddie and niece Charlotte.

The announcement of my departure from hospital had just been broadcast and had unmasked their secret plans as they had to check I'd still be at the hospital for them to complete their mission. As it turns out they had nothing to fear and they arrived in ample time.

It was great to see familiar faces and the basket of goodies they brandished as they walked through the door will be very much appreciated and as the photo below shows brought a smile to my face. 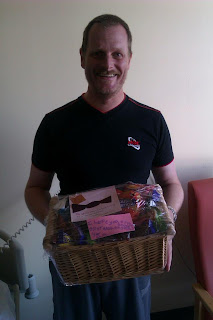 We chatted for a good while and had a great laugh between us. Lisa is a very experienced nurse and understands better than most some of the issues I'm facing. We'd been up to Andrea's parents the weekend I really started feeling that things were not right and called at Paul and Lisa's the following morning so that Max could go for a walk with their dog, Echo. I wasn't feeling too well so stayed and had a coffee with Paul whilst the girls and kids all went for a walk. Lisa confessed to me yesterday that as we left that morning she said to Paul, 'he doesn't look well'. That must be a nursing intuition!
Well the mercy mission complete they departed in time to go and collect Charlotte and Freddie from school back in Leeds.
Not long after my next guest arrived, who had already planned on coming for an hour or so but in the end got press-ganged into waiting the day to give me a lift home. To Phil Bamber I will be eternally grateful for his company yesterday afternoon as we waited for the various bits of the jigsaw to fall into place that would finally let us leave.
Then yet another guest arrived in the form of Scott Pagano, one of my rugby buddies. He came bearing gifts too in the form of a Northampton Saints flag, which I will deploy to wind up the natives when I return to Leicester, and a Saints Rubik's cube, which should keep me occupied during the long hours in hospital.
Last weekend Scott and one of his sons climbed mount Snowdon and as we talked about it and looked through the photos he had, I became inspired to perhaps do the same when all of this is over to hopefully mark the end of my journey and the conclusion of my own metaphorical climbing of a mountain. In so doing it must give a great opportunity for some fund raising to be done and give something back to the people who make the treatment and hopefully cure of patients with Leukaemia possible. My current thoughts are to raise funds for the Leukaemia and Lymphoma Research charity as it is dedicated to blood cancers of the type I have.
Since then my mind has been working overtime and a plan is hatching which I think could be well worthwhile and could potentially raise money that could be put to good use. Through Sam's rugby I have a fleeting association in the main with Towcestrians Rugby Club, as does Scott. I think there might be an opportunity to get a substantial group together made up of parents, coaches and kids to do a 'Dieseldrinkers Road To Recovery - Tour To The Top' sponsored walk up Snowdon or something similar when I'm over this and my fitness returns - perhaps mid next year.
Not being one to do anything by halves my mind is also working on ways of making this a really special event to maximise the amount of money I could raise and I have a totally off the wall idea that I'm hoping to explore, again with a rugby flavour, but I'll say no more about that until I've made some enquiries.
﻿

Back to the escape plan.

Scott left after an hour or so, leaving Phil and me to wait for the cogs to whirr. I had to have a final anti-fungal (makes me sound like a fish doesn't it) treatment which left me on an IV pump for an hour and half, so we sat and watched daytime TV. Has anyone ever seen Man vs Food??

With the treatment finished the next obstacle was getting my pharmacy delivery sorted ready to go home which seemed to take an eternity. In my frustration I made a few trips to the kitchen and back to try and highlight the fact that I was till there! My dinner came and was consumed and still we waited.

On one of my journeys to the kitchen though I did catch sight of one of the nurses in tears and being comforted by one of the other nurses. I've mentioned before that one of the other patients (there are only 5 of us on that ward) has clearly been having a hard time and I think yesterday things may have taken a turn for the worse. I hope I'm wrong. With that in mind I elected not to make a nuisance of myself and waited my turn.

My pharmacy finally arrived about 7pm and the cannula was at last removed from my hand and after a briefing about my return on Thursday and precautions whilst at home I was finally free to leave.

Andrea had managed to keep my arrival home a secret from the boys so it came as a total surprise when we arrived home about 8.30pm. I rang the doorbell and stood with my back to the door in the dark as they opened it. As I turned they both leapt into my arms and tears were shed all round. It was all very emotional but so bloody good to be home.

It felt great to sleep in my own bed for a change, even though it was short lived as the dog was up and whining at 4.30am. I elected to let Andrea stay in bed as she's had to put up with him doing the same for the past 2 weeks so I went and laid on the sofa in the living room and Max went to sleep again.

We've walked the boys to school this morning which helped me realise how little walking I've done over the past couple of weeks and I actually found it quite tiring. Andrea has just got back from walking Max with her friend Wendy and we're having a coffee.

The next job is a trip to Boots to get a decent thermometer and blood pressure monitor as I need to keep an eye on things myself in the absence of the nurses observations. Any issues and I'll be straight back in hospital!

So for now I'm very happy. I never expected to be able to come home at all during this first 28 day induction phase and I hope it's a sign that things are headed along the right path and that my body is reacting as it should. I'm not taking anything for granted though and perhaps the goings on down the ward corridor yesterday are a sharp reminder of how serious this could all become.

Finally, I have to say thanks to Paul and Lisa for their mercy mission, to Phil for his unstinting patience yesterday (and the lift home), and to Scott for his inspiration to get my arse in gear at the end of this and do something worthwhile.

Thanks again for reading.
Posted by Dieseldrinker at 11:01