Last night I got a card with a letter inside from my Great Aunt which made me chuckle at her fantastic wit and humour. She's in her early 90's and had a spell in hospital herself recently after a fall. But the Yorkshire Grit that runs through her veins is the same Hartley blood that courses through mine and her letter is a wonderful tonic. If I can write a reply that's legible I'll write back but my handwriting is not a patch on hers. I know her daughter, my Aunt Kathleen, is following my blog so in the meantime I hope she'll pass on my heartfelt thanks on my behalf.

I had my second dose of chemotherapy last night too which again went smoothly, without incident and has so far shown no side effects other than a strange taste in my mouth which is bearable. The steroids which restarted yesterday are so far being taken without a recurrence of the heartburn, which is hopefully a product of me taking the precaution of ensuring I have a good lining of breakfast in my stomach first, with my cereal, fruit, toast and jam interspersed with the steroid tablets.

Mind you, after reminding the Nurse-in-Charge this morning of her promise earlier in the week of a cooked breakfast, it was chased up and sausage, bacon, beans and scrambled egg materialised, so nurse Jayne has gone straight to number 1 in the popularity stakes! Not only that but the dietitian has also been to see me today and I'm now on the list for a cooked breakfast over the weekend and all next week! Result!!

I had an early start this morning and woke up at 4am in one of those silly moods when you lay awake thinking about totally unimportant trivia that spins round in your head and induces a frustrating insomnia. Consequently I tossed and turned for the next 2 1/2 hours until I decided to put some relaxing music on and bide my time till my 7am observations. I don't feel tired though but if necessary might catch a little nap later.

My blood tests today revealed that I'm showing signs of Anaemia, which means this weekend at some point I'll be having a blood transfusion of a couple of units of blood to increase my red cell count and restore my energy carrier. To all those that donate blood out there I applaud you and am living proof that those donations serve a purpose. Fingers crossed the transfusion is as uneventful as the other treatments I've had so far.

I was going to expand further on the Coiners today, but having had a visit from my boss Andrew this morning thought I'd talk a bit about work and the impact it has on our lives. I think Andrew was pleasantly surprised to see that I don't look unwell and I admit I don't feel unwell, but my presence here alone is testament that things are not right inside.

It's always nice to have a break from work but I bet not many of us would choose to have it forced on them the way mine has. I'm firmly in the 'work to live' as opposed to 'live to work' camp but that's not to say I don't enjoy work and only attend begrudgingly.

The fact is that for most of us, work takes up a significant proportion of our waking hours and is therefore a major part of our lives. So there's no pleasure in doing a job you don't like, or working with people you don't get on with. In that regard I can confirm that I enjoy my work and regard the people I work with as much more than mere colleagues.

Many will know that I work for Balfour Beatty Engineering Services as a Project Manager having joined them when they were Haden Young just over 8 years ago. Part of the massive Balfour Beatty group, our part of the business is responsible for mechanical and electrical building services installations in various types of buildings and during those 8 years I have been associated with a couple of fantastic projects.

Not only that but you might think that being part of a huge organisation could make you feel quite anonymous, but chatting to Andrew this morning reminded me how human the working relationships are and the camaraderie that exists, certainly amongst the teams I have been part of. The number of emails I've had from workmates past and present together with the comments in the card from the team at Heathrow that Andrew delivered remind me of those special friendships that I have with my workmates. Whilst I miss the daily banter, the occasional email keeps me, and them, on their toes and still makes me feel part of the team, so please keep them coming!

I joined the company as part of the team that would ultimately build the new Queen Elizabeth Hospital in Birmingham. What a team that was and what a fantastic project to be part of. The new hospital is still the largest single site hospital build in the UK and has some staggering statistics. 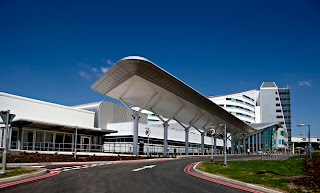 It has almost 1000 beds spread over 29 wards, not including the extra couple of hundred we created in the Mental Health buildings we built first to make space for the new hospital. It has 32 operating theatres, 100 critical care beds (the largest unit in Europe), an automated laboratory the size of a football pitch, and accommodates the biggest new investment in imaging equipment in the NHS with 6 MRI scanners, 6 CT scanners, angiography rooms, cardiac catheter labs and many more general x-ray rooms.

The hospital also plays host to the Royal Centre for Defence Medicine and all injured troops returning from conflicts such as Afghanistan are treated at the QE Birmingham. Knowing you have contributed to a facility that enables the treatment of these brave people and puts them on their own road to recovery is perhaps one of the most rewarding aspects of having being involved in the project.

So it was a privilege to be part of the team that built this fantastic facility, but for all of its scale the project team was relatively small and very close knit. The photo below was taken in June 2009 and shows the external facade almost complete. In fact by this time much of the internal fit out was also substantially complete and not long afterwards the first areas were handed to the client for installation of their specialist equipment. 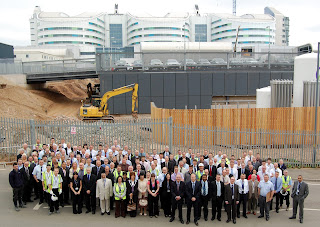 Virtually all of the team that co-ordinated and managed the entire build of the hospital is therefore in this photo and to my mind it's not a lot of people at what would have been around its peak. Several people reading this blog will be in this photo and if my memory was better I'd probably be able to put a name to everyone in the picture. And that is because it was a special team, a friendly team, a fantastic team to be part of. Everyone had respect for every other member of the team and the role they had to play. I'm proud to have been part of it.
The team was tiny when I started, probably about 20 in number, and I was one of the few to stay right through till almost the end of the project when there was only about a dozen of us wrapping up loose ends in early 2011.
But with things largely complete I moved on to other things and became part of another team working on a bid to build a new hospital at Alder Hey Children's Hospital in Liverpool. Again this was a small team and I have to say another very good one. Extremely knowledgeable about the construction, operation and maintenance of hospitals and skilled at listening to and understanding the clients needs. The building and some of the innovative solutions we came up with as a team would, I think, have been fantastic to work on and rewarding to complete.
Alas the client selected our competitor based primarily on financial scoring and the loss of the bid was difficult to take. I felt physically sick when the news came in on the Friday and took myself off for a solemn walk round the parkland around our office. It was over a years work down the drain and I know the rest of the team took it every bit as hard and were bitterly disappointed.
The following Monday my boss and I consoled ourselves over a coffee and weighed up the options for me. Without any major bid work to get stuck into I have to say I felt things looked bleak. However later in the day an opportunity came up to discuss moving to another of our prestigious projects. After an interview with Andrew that Friday, which also included the client, within another week I joined a new team at Heathrow's new Terminal 2B and have been there until illness struck. 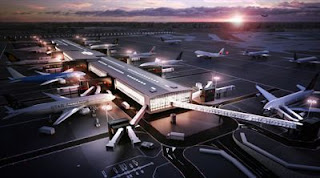 Once again the Team at Heathrow has the same Balfour Beatty qualities running through it's veins and is great to work within. The BBES M&E team in particular led by Andrew, and as part of that the ICS (Information and Communications Systems) team that I subsequently managed are a true bunch of friendly, knowledgeable, professional people and a pleasure to work around.
I won't deny that the daily commute from Northampton to Heathrow was punishing and became exhausting after a while, but the prestige of the job and the team around me made the journey worthwhile. It was good to see a familiar face today and I know that the team is more than capable of completing the job to the usual exceptional standard. It's just a shame that my part in it has been temporarily curtailed.
The Balfour Beatty business values are Integrity, Teamwork, Excellence and Respect, and whilst the business runs training sessions to drum these into us, I have to say that the people and teams I've worked with over the past 8 years have had all of these in bucket fulls without prompting in a classroom.
The construction industry is running through difficult times in the continued recession and Balfour Beatty themselves face some difficult changes as a result. I only hope that as many of the fantastic people I have worked with emerge intact from the changes and that when I return to work I'll be able to work with those people again.
Thanks for reading.
Posted by Dieseldrinker at 19:00